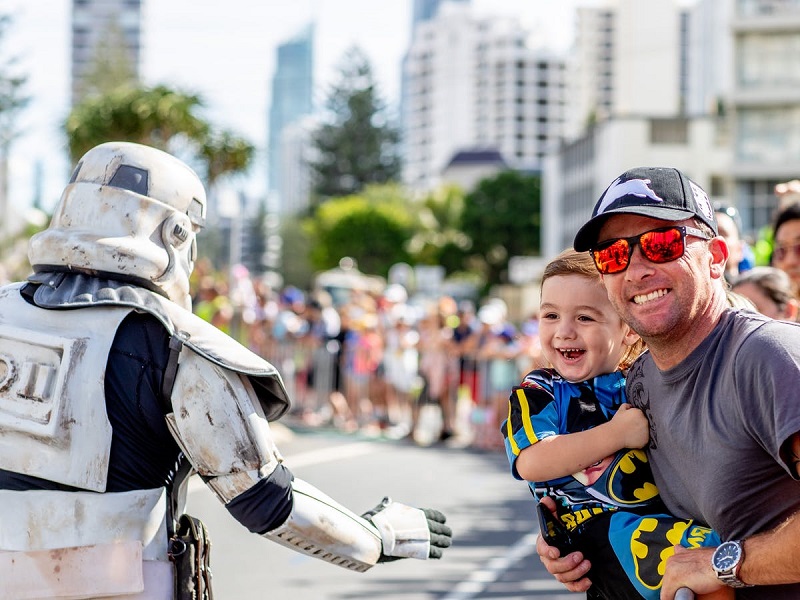 Autumn has never been more exciting! The Gold Coast calendar is packed with unmissable events this autumn, ready to take over popular tourist destinations such as Surfers Paradise and Broadbeach with the majority being FREE to attend.

From Gold Coast Superhero Weekend to the highly anticipated return of Blues on Broadbeach, there’s something for everyone this autumn 2020, guaranteeing an ideal excuse to head to the coast for beach relaxation and nonstop fun in the sun.

All set to take place near our Main Beach accommodation at Pacific Views Resort, here are seven huge Gold Coast events to put on your calendar this autumn:

Over one action-packed three-day weekend, Broadbeach will come alive for Gold Coast Superhero Weekend 2020, a free event during which thousands of comic book lovers from all over Australia will flock to the Gold Coast for special meet-and-greets, exclusive merch and eye-catching cosplay on the beachfront.

Held annually, Gold Coast Superhero Weekend is the ultimate opportunity to meet like-minded comic book fans and dress up as your favourite superhero or villain, with the yearly Superhero Parade being the spectacular main event. Arriving hand-in-hand with Supanova Comic-Con at GCCEC, get ready for this lively weekend in Broadbeach from March 13 to March 15.

GC Laughs Festival will return funnier than ever for its second year, rounding up some of the biggest names in the industry for a full week of stand-up, sketch and kids comedy at the Home of the Arts in Surfers Paradise.

Discover and be entertained by eclectic street performers from all over Australia, showcasing their talents to the public and celebrating the art of street entertainment. This 2020, Australian Street Entertainment Carnival comes especially for the Easter weekend from April 10 to April 13.

Boasting 12 consecutive days of events held all over the Gold Coast, Gold Coast Film Festival is an unmissable festival for movie lovers with a program that involves Gold Coast film location tours, special guest panels, filmmakers’ workshops, awards parties and free movie showings on the beach and in famous venues such as Home of the Arts.

Gearing up for its biggest turnout yet, Surfers Paradise LIVE 2020 has already got festival-goers excited with a brand new and epic lineup featuring Vanessa Amosori, British India, Spiderbait, The Undertow, Baby Animals and more – all performing for FREE across three outdoor stages in Surfers Paradise Gold Coast.

On the beach and Esplanade, join more than 10,000 music lovers for this free autumn music festival, comprising the annual Gold Coast Music Awards with live acts to see each day from morning until evening. Invite your favourite people and get set for an electric festival atmosphere in Surfers Paradise from April 30 to May 3.

If you need another excuse to head to the beach this autumn, Australian Surf Life Saving Championships is returning with another week of high-octane surf lifesaving on Burleigh Beach and Kurrawa Beach Broadbeach, which will gather Australia’s best surf lifesavers for a thrilling championship program of offshore and onshore events with lots to spectate.

It’s the biggie that everyone is looking forward to this autumn! Blues on Broadbeach Music Festival is on the horizon, arming itself with an explosive lineup for May that will take over the streets and beach in Broadbeach for four days of FREE live music across multiple indoor venues and outdoor stages.

Tommy Emmanuel, Gaby Moreno, Karise Eden, Kim Churchill and Bondi Cigars are already confirmed with more on the lineup and others yet to be announced. Having hosted some of the globe’s biggest artists in blues and rock since 2002, Blues on Broadbeach 2020 isn’t to be missed from May 14 to May 17, yours to soak up within a short drive from our Main Beach Gold Coast apartments at Pacific Views Resort!

Book your perfect stay during any of the above with our Gold Coast resort accommodation at Pacific Views, comprising fully self-contained one and two-bedroom holiday apartments on Main Beach Parade with panoramic beach and ocean views. Our standard and superior ocean view apartments cater to all budgets and come complete with guest access to facilities that include two onsite swimming pools, a gym, tennis court, sauna and more.